So you think you want to move to Japan to make some good money?

While Japan (especially Tokyo) does live about 5 years in the future, there is a price to pay if you are Japanese and working in Japan.

The bottom line, Japanese don’t get paid much considering the hours they put in and the level/quality of service. They still get to buy all those expensive clothes because most of them are over 30 yrs old and still living at home. No rent, no car payments make it easy to buy a Gucci bag on a $2000 salary. 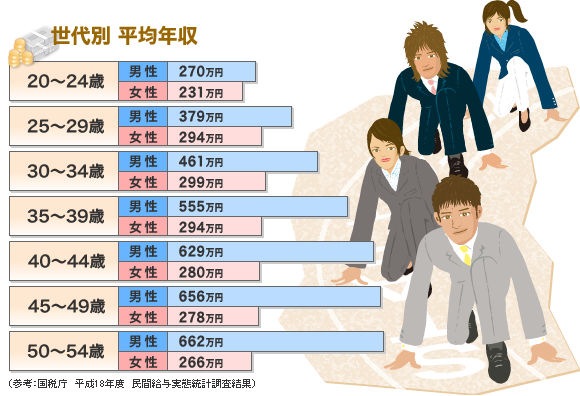 Here’s the national average of what people make. However, it obviously differs according to occupation.

The figures below are simply calculated on a 100 yen rate because even though the exchange rate helps Japanese when they travel abroad, it doesn’t do anything for the average worker in their daily purchases. The figures below give a better idea of salary as of 2006 but things haven’t changed that much after close to 10 years…

Take it how you want but it’s clear that women are not treated equal and that guys older than 40 have no future for a pay raise.

Could you live off of this?