The New Age of Capsule Hotels 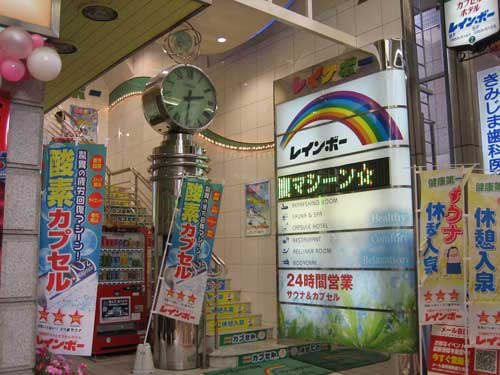 Capsule hotels are a strange concept to the rest of the world.

Why would anyone pay money to sleep in a small tube that’s so cramped?

Why would anybody build a capsule hotel and how could anyone possibly make a living off of it??

Well, in most parts of the world, that thought would be true…but once again, not in Japan.

You see, you have to get into the mentality of living here in Tokyo to truly get a feel for how this came about and why it does work. Living in Tokyo is expensive so many people commute on the train from the outer parts often traveling for over one hour on cramped trains. Japanese business life often requires after hour dinners and entertainment.

This is all good except for the fact that many of the trains stop running at 12am.

…those trains also stop running at 12am.

Sooo, if you live 1-2 hours away and if you don’t plan ahead, you’ll get stuck half way home when the trains stop running and your only other option is to hop in a taxi and pay up to $100+ for a ride home.

Using I-MODE and the internet, people can now plan ahead and find out what the last train THEY need to take will be around.

However, many times, they have to leave Tokyo around 10pm-11pm to make it all the way home.

This is OK most of the time but there are times when you just can’t, or don’t want to leave so early.

What do you do then?

or you can book a karaoke room and wait it out until the morning.

They will both cost you and you won’t get a good night’s rest.

Many would just try and go to a hotel, but the hotels in Japan cost $130-$300 a night. That, plus your drinking bill will break you in one night. 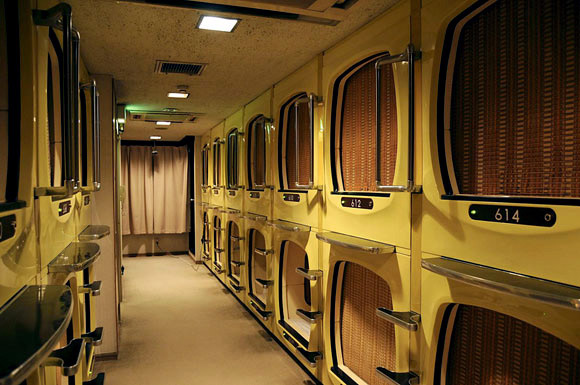 Originally intended for the salary man who was stranded in Tokyo due to work related entertainment, the capsule hotels offered the basic necessities (bed, quiet, toiletries)  for a cheap price.

The salary man could wake up the next day, go the convenience store and buy a cheap pair of socks, shirt and a necktie and go to work refreshed. 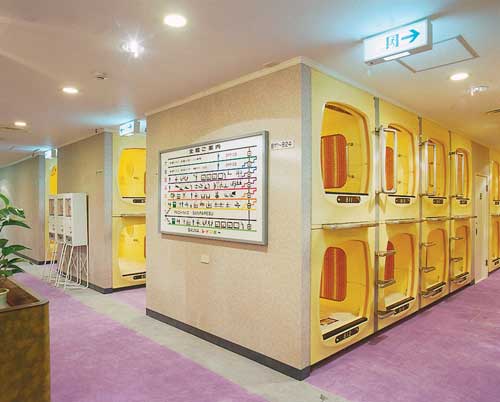 Unfortunately, salary men were the main users of capsule hotels and their image was not very good. 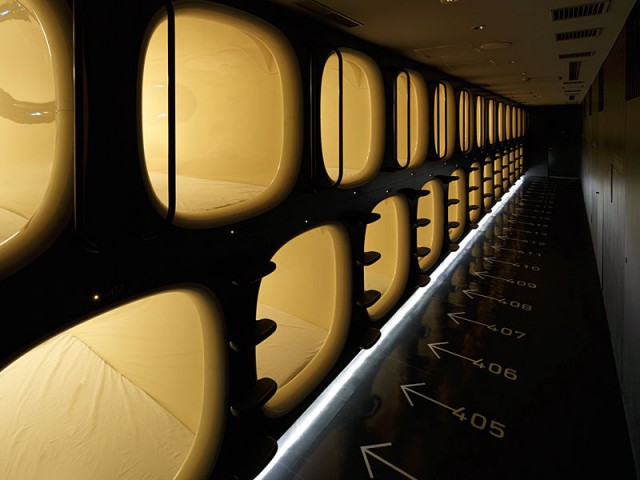 Things move fast here in Japan and now, it’s not just salary men who are stranded in Tokyo.

With young women and other artistic people looking for a quick comfortable place to stay, a new generation of capsule hotels has emerged to fulfill that demand.

They are modern, clean and have beautiful design. 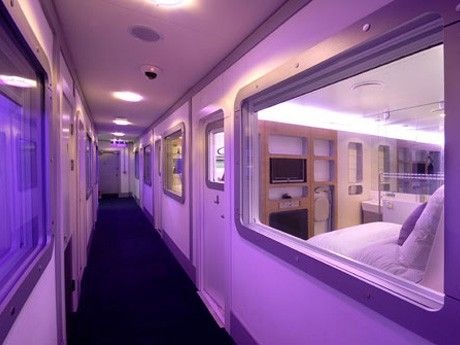 Long gone are the days of smelly old capsules.

Many resemble something out of a Gundam movie or space station terminal. 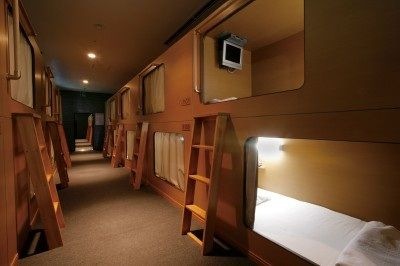 Some mimic the themes from ships. 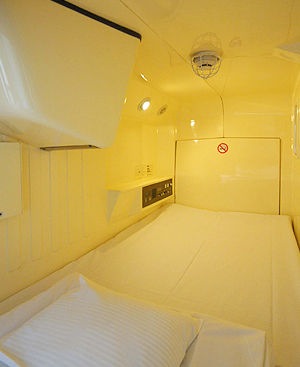 All the rooms have clean linens, a personal TV and control station.

With Wifi and all necessary plugs, many young people check in early and surf the net or finish up some work. 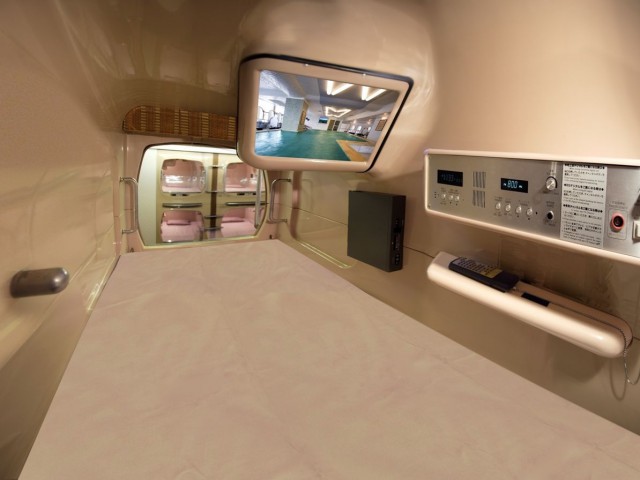 The view from inside isn’t as bad as it seems.

One prime example of the next generation of capsule hotels is 9H, located in Kyoto. 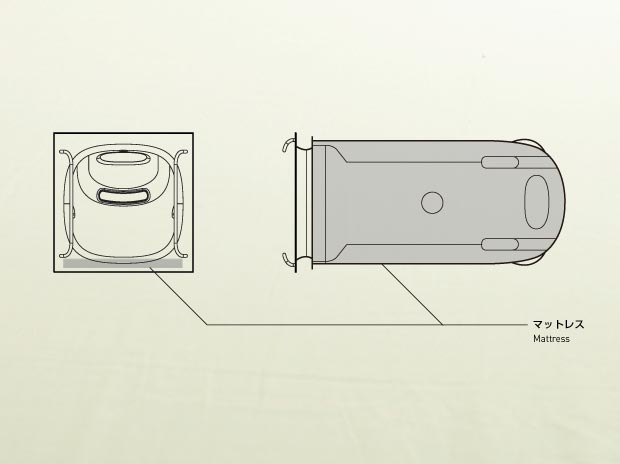 Each capsule has been designed for comfort and incorporates the latest technology and therapeutic knowledge. 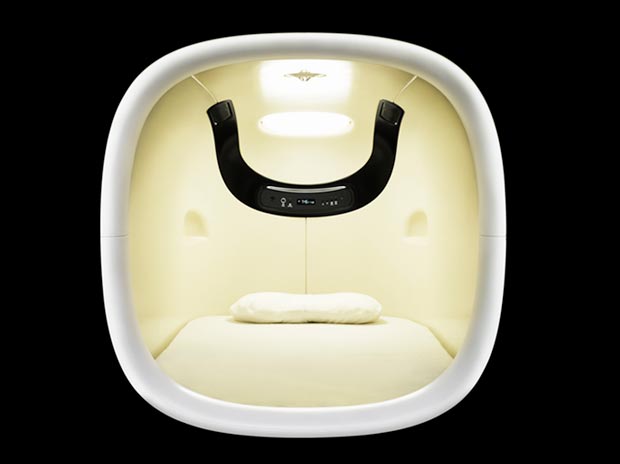 Visual presentation is just as important.

The capsule projects a warm and welcoming atmosphere. 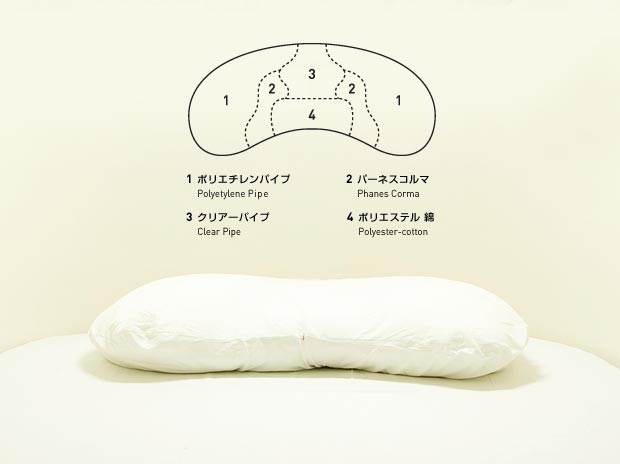 The 4 staged pillow shows the level of attention and detail the staff has put into the establishment.

Customer satisfaction and comfort are at the top of the list.

The new clientele demands this. 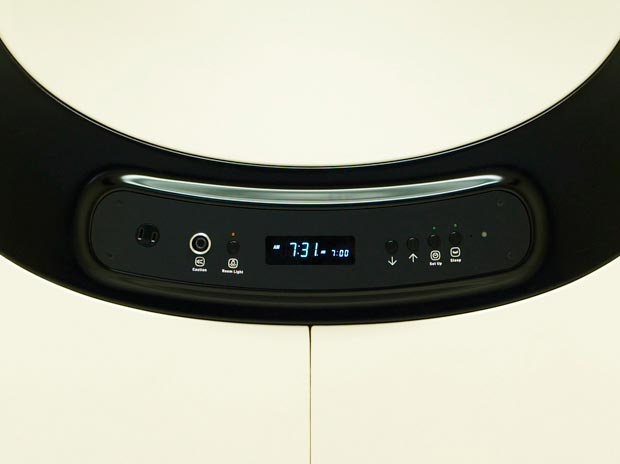 There is a central locker room area in front of the showers to secure your belongings.

Women can stay in comfort and relax as well on their own private floors.

The bathrooms incorporate the latest washlet technology and everything is super clean. 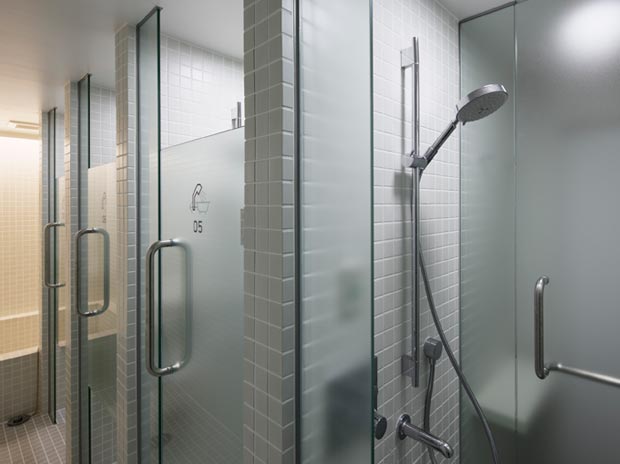 The warm illumination makes you forget where you are. 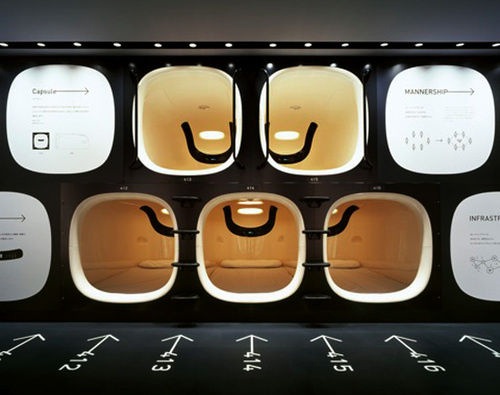 2 Responses to The New Age of Capsule Hotels