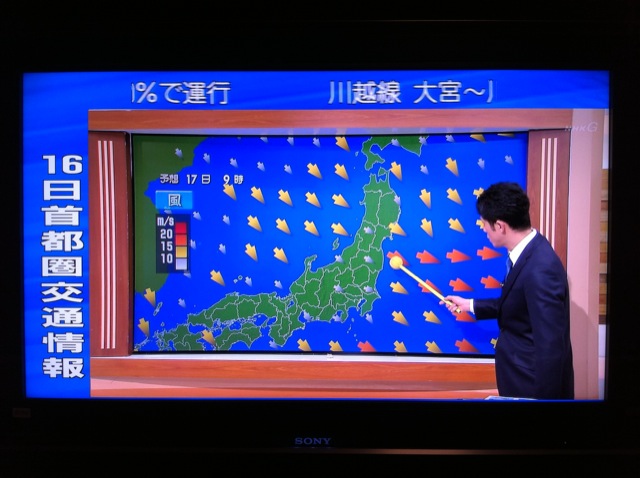 There was another magnitude 6+ earthquake in the Shizuoka prefecture last night and some more explosions at the nuclear plant.

Heroic tales are streaming in on Twitter and blogs about the workers who are risking their lives to try and cool the reactors down.

Meanwhile, flocks of people are leaving Tokyo daily while embassies are stating that the radiation levels in Tokyo are harmless.

I have my bags packed and am ready to go to Osaka in a heartbeat. I figure you have less than 30 minutes to get to the Shinkansen bullet train station after an evacuation announcement and after that, you’re stuck in Tokyo.

I also noticed (to the dismay of maybe Hawaii) that the news programs are covering detailed wind conditions.

So far, it seems Tokyo is OK for now…but reactor 4 is now completely unattended and is rising in temp, the used cores are outside the main core retention unit so if that blows…well, let’s just say it’s a problem.

I also found out that the reactors are all connected…ohhhh, that’s why when one catches on fire, the next one explodes…

Many say they won’t blow anymore.

Unlike Chernobyl, the radiation amount is smaller and the fall out isn’t being shot as high into  the atmosphere. They figure the fallout will be contained within the 30km radius.It’s classified as a level 6 because it affected the surroundings but it won’t spread as far as Chernobyl. Of course, minute levels of radiation may blow over, but they will be greatly diluted by then.

The bigger problem is radiation getting into the local Japanese foodchain.

So it’s gonna be an all or nothing event at this point.

It sucks that the nuclear event is overshadowing the fact that over 10,000 people have died or are missing from the earthquake.

It’s snowing like crazy, they have no food, water, or medicine for the elderly.

Oh man,…what am I doing thinking only of myself..

Pin It
Previous post:
Fear, Anxiety…An amateur nuclear crisis recap Next Post:
Thank you… A piece of mind from the British Embassy in Japan.