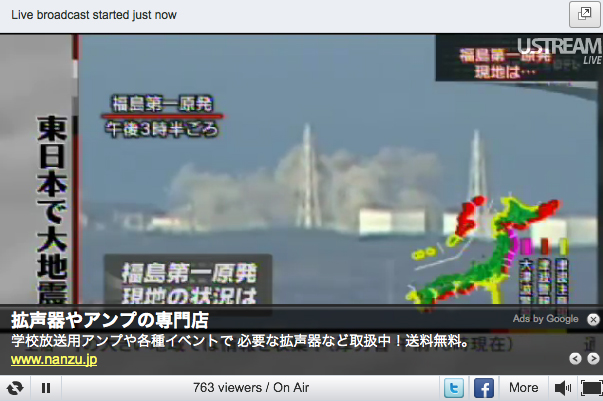 An explosion at the #1 nuclear facility in Fukushima a few hours ago.

The government said they were trying to “relieve” pressure by releasing some low radioactive pressure into the atmosphere.

They postponed a news conference once…

then they announced they don’t know what it is exactly.

They are announcing further evacuations, and the possibility that the #2 reactor will explode too.

They have warned of more aftershocks, tsunamis, nuclear explosions, and chemical fallout with rain.

UPDATE: The initial explosion was NOT a nuclear meltdown, but a hydrogen explosion. Nuclear plan #2 and possibly #3 may be affected…All roads and trains leading south from Fukushima have been closed…containment?…scary stuff going on.

UPDATE: Reactor #3 is most likely in melt down. All the super markets are sold out of face masks, water, and other survival goods…unreal

UPDATE: reactor #3 will experience a hydrogen explosion like #1 shortly because cooling the core with salt water (which is a last minute effort), is not working. Hydrogen is building up in the housing as we speak. Already, 9 people are highly infected withe radiation and 190 people are testing positive for radiation in one form or another.

Hmm…CNN is reporting the facts quicker and more straightforward than Japanese TV. To prevent panic, Japan is “watering” down the damage estimates and many citizens know that. They understand why it happened and just want the down right facts to protect their loved ones.

I received word a retweet from a friends who actually works at the reactor. He promised to risk his life to prevent a nuclear explosion from happening. We are all with him.

One Response to Nuclear Meltdown: UPDATED